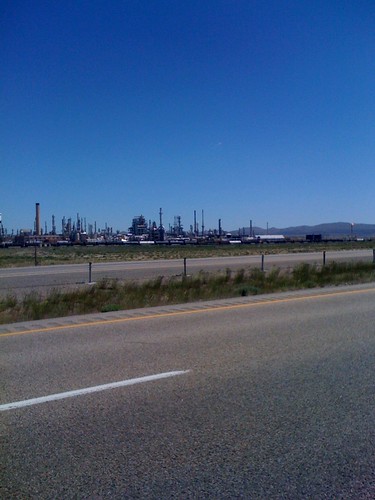 If I'd known this, I'd have made a point of riding out to Sinclair WY after sunset yesterday, just so I could have had the pleasure of riding through a refinery after dark.

There's something special about riding a bicycle through a heavy industrial area at night, after most of the workers have gone home: you're surrounded by huge machines you don't understand, as if you're some kind of "ghost in the machine," or a visitor on an alien world.

This experience is even better when huge flames are part of the surrounding industrial landscape, as obviously they are with refinery flare lines. 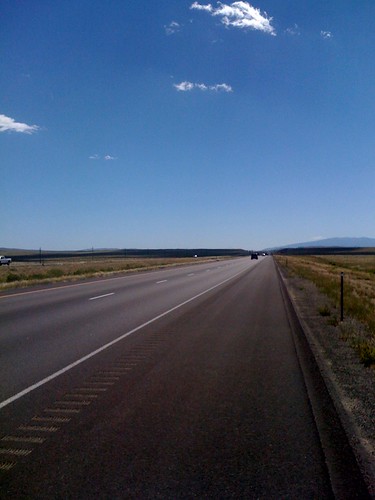 I won't deny that the second half of today's ride became annoying (FWIW due to heavy and random wind gusts coming from my right), but this morning portion was wonderful: beautiful road surfaces, no climbs, ample shoulders, and great scenery. 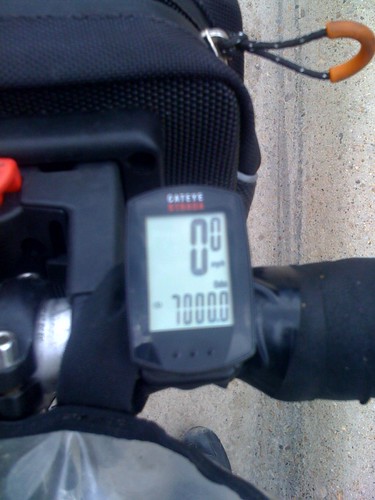 The pedals and saddle, having been moved over from my first bicycle, probably had at least 1500 miles on them before being moved over to this bicycle at the time I purchased it. Each are still functioning perfectly.

Literally no part of this bicycle nor any accessories added to it after its purchase have failed, other than parts which by their nature have an inherently limited service life and must be periodically replaced: its chain, tires, and brake pads [Note: I also replaced the cogs once in Louisiana, but in retrospect that probably wasn't necessary...]

Saturday, July 17: ride to Canon City CO (99 miles, but that sounds worse than it is - after only 11 miles I cross the highest point of the TransAmerica Trail, which represents its last continental divide crossing, so after that crossing 11 miles it's essentially all downhill)

Sunday, July 18: ride to Pueblo CO (a relatively easy 50 miles, but this is the city where I'll need to pick up a new chain and the remaining maps, possibly get my cogs replaced, and see a Colorado State court proceeding, so I'll probably need to stay through at least Monday night)

The above (admittedly ambitious) schedule may suffer a delay of a day or two depending on wind, thunderstorm, and rain conditions, or my temper.
If you plead guilty, and the judge looks directly at you and asks, "So, tell me what you did that makes you guilty," it's VERY hard to lie.

Seriously, not ONE response to that question felt rehearsed, and I sat through at least four of them.
Collapse