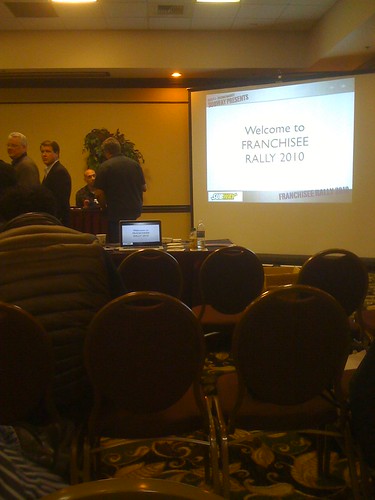 Here's my Second Law: "You're never asked for ID when you're wearing a business suit."


The back story here is that I've lived in Seattle so long, and systematically explored so much of it, that if I want an entirely new experience I really need to make an effort. Lately, in my limited free time, what has been amusing me is doing a little background research, putting on a business suit, and attending something absolutely not intended for the general public. So, here you see a photograph of the Washington State meeting for franchise owners of Subway sandwich restaurants (as well as their field managers). My cover story was that I was seeking financing through their Small Business Guaranteed Loan program to open a new franchise in the Issaquah area. In addition to the business suit I had a clipboard, and a Subway sandwich hat that I'd talked a Subway employee into giving me earlier that day.


For what it's worth, I now share upper management's concern that many Subway locations aren't ready for the increase in guest flow which will be associated with their Feb 9 "Any Sub for $5" promotion. I'm also inclined to agree that raising pricing for tier 2 subs above $6.50 is self-defeating, since doing so will only push regular customers into selecting the subs which are always priced at $5.


I do need to say that I felt sorry for Washington State's new bread supplier for the Subway chain, who presented at this event: it's not his fault if employees can't follow the simple instructions included with the bread machines (though in fairness not including a hygrometer as part of each oven kit does strike me as being penny-wise and dollar-foolish - for the bread supplier to have to come out to a location just to measure oven humidity, during which time the baking results are presumably sub-optimal, just seems wasteful).


In case you were curious, the lavish buffet at this event included no sandwiches of any kind.


Anyway, since I seem to be caught up with my reading for each of my law classes, I think I'll have another adventure today. Maybe I'll do a little online reading about luxury boating, then see if I can get on a yacht by pretending to be interested in buying it? That seems like a worthy challenge... 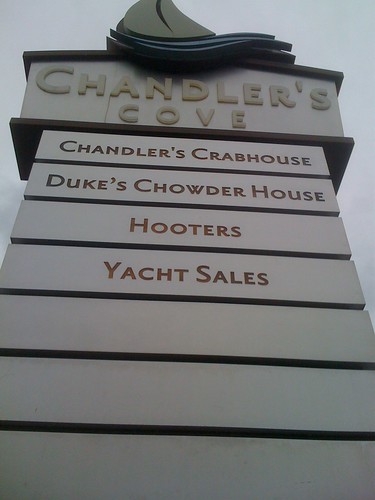 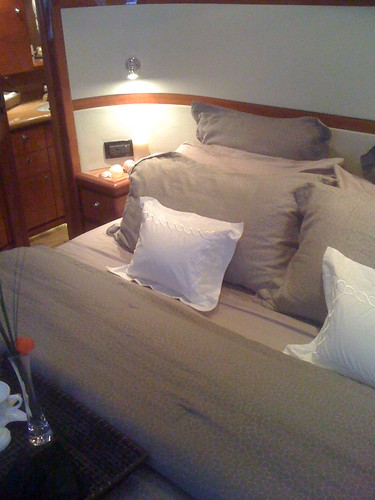 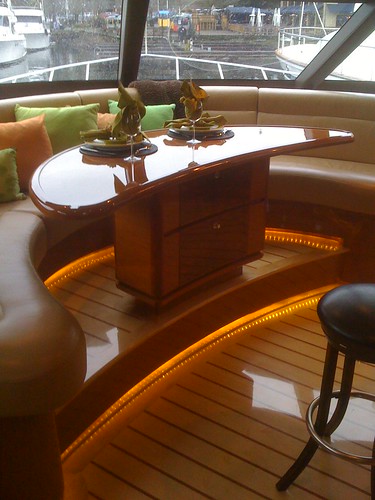 This yacht really is beautiful.

Still, there are much less expensive ways to "get away from it all": turning off your phone works pretty well :)

The Seattle Boat Show was being held today, so I didn't actually didn't need to pretend to be rich in order to get a tour of a yacht.
Welcome to the February 2010 issue of Inter Alia, my monthly guide to Seattle events for University of Washington and Seattle University law students.

Coast Salish designs by Peter Boome (UW Law Class of 2011) are now being displayed on the first floor of Gates Hall. So, if you're a UW law student you don't have to go out of your way to see good art this month: when walking to class, just look to your right.

Robert Carosino, Chief Counsel of the Richland Operations Office of the US Department of Energy, will discuss the history and progress of nuclear waste cleanup at south-central Washington's Hanford Site on Feb 4 @ 12:30pm in Gates Hall Room 119. The Hanford Site was created as part of the Manhattan Project in 1943, produced the plutonium used in the world's first nuclear bomb, and went on to produce the plutonium for most of the subsequent U.S. arsenal. Now, it contains two thirds of the U.S.'s high-level radioactive waste. For those with further interest:

Suzanne Vega performs on Feb 25 @ 8pm at the Moore Theatre, and Leo Kottke performs on Feb 19 @ 8pm at Benaroya Hall. If you'd prefer something less introspective, two fun Celtic rock bands perform at the Tractor Tavern this month: The Town Pants on Feb 4 @ 9pm, and The Clumsy Lovers on Feb 6 @ 9:30pm.

This is an especially good month for work by living composers: your best bets are the Kronos Quartet on Feb 2 @ 7:30pm at Kirkland Performance Center, or the Fisher Ensemble on Feb 26 and 27 @ 8pm at Chapel Performance Space.

Having said that, as someone who used to play the oboe I can't help but mention superstar oboist Alex Klein will be performing as part of Simple Measures (a very cool project BTW...) on Feb 12 @ 7:30pm at Q Cafe, and on Feb 15 @ 7:30pm at Chapel Performance Space.

The Olympia peninsula's wineries host their annual "Red Wine and Chocolate" event over Feb 6-7 and 13-15 (11am-5pm), with each winery striving to make the perfect pairing between a specialty chocolate and one of their reds. The neat thing about making a day trip of this is that you also get to enjoy a relaxing ferry ride, and the natural scenery of the peninsula itself. Particularly if you want to do this on Valentine's Day (Feb 14), you should purchase tickets in advance.

The world's largest species of octopus is the North Pacific Giant Octopus, whose natural habitat includes Seattle's coastline. As such, the Seattle Aquarium hosts public events involving this magnificent creature as often as it can. But the strangest of these annual traditions has to be "Octopus Blind Date," which the aquarium hosts every Valentine's Day at noon: they put one male and one female giant octopus in the same tank, after (and I am not joking about this) decorating the outside of their tank with little paper hearts. They will also be releasing at least one giant octopus back into the wild in a public ceremony on Feb 20 at noon.

Pacific Northwest Ballet performs Tchaikovsky's Sleeping Beauty over Feb 4-14, but other interesting choices this month include the Alberta Ballet's performance of Joni Mitchell's The Fiddle and the Drum on Feb 23 @ 7:30pm at the Paramount Theatre, and the Beijing Dance Academy's performance of The Butterfly Lovers on Feb 27 and 28 @ 7:30pm (same location).

I've mentioned the Cinebarre before: if you're over 21, there's no better place in this area to see a movie. For Super Bowl Sunday on Feb 7, it looks like the Cinebarre is doing something unusual: projecting the game live on their movie screen. You can grab a seat as early as 2pm. Admission is free, according to their ad.

The mainstream choice this month is probably the Seattle Repertory Theatre production of David Mamet's Glengarry Glen Ross over Feb 5-28. [Note: After seeing Glengarry Glen Ross you could rent the first two seasons of the TV show Mad Men for an even more colorful look at the business culture of that same era, but be warned that show is notoriously addictive...]

The fringe theatre choice this month is probably master puppeteer Kyle Loven's performance at the Annex Theatre on Feb 2-3 and 9-10 @ 8pm (only $5 with student ID).

There is one law-themed theatre performance this month: the University of Washington School of Drama's presentation of the courtroom drama The Last Days of Judas Iscariot at Meany Studio Theatre on Feb 3-6 and 10-13 @ 7:30pm, and Feb 7 and 14 @ 2pm.

In film, the two best choices this month are probably Mystery Team at Central Cinema (Feb 1, 3, and 4 @ 7pm), or Spike and Mike's New Generation Animation Fest (same location at various times from Feb 5-11).

In live theatre, one interesting choice by Wing-It Productions could be their improvised "whodunnit": the audience chooses the clues and the criminal, and the performers make up the rest of the story. Feb 4-5 and 11-12 @ 8pm in the Historic University Theater.

The new iPhone app LawStack is wonderful. It contains the full text of the current (12/1/09) editions of the Federal Rules of Civil Procedure, Appellate Procedure, Evidence, Bankruptcy, and Criminal Procedure, as well as the Constitution with all amendments. It's searchable and bookmarkable, and the interface is hierarchical. It's also completely free, and doesn't even pester you to upgrade or buy anything.

A different company (BeamItDown) offers a free app for the iPhone containing the Federalist Papers, if you'd like to have that on your phone as well.

In my opinion the two best law-related podcasts are the Supreme Podcast, which I've mentioned before, and FORA.tv's "Law & The Constitution," which I haven't. For the latter, in iTunes click on iTunes Store, then iTunes U, then FORA.tv (under "Featured Providers"), then "Law & The Constitution." Recent issues have included Justices Scalia and Breyer debating how the U.S. Constitution should be interpreted, Chief Justice John Roberts speaking about James Madison and the Supreme Court, and Justice Scalia speaking on globalization and the law.