Where my family name came from 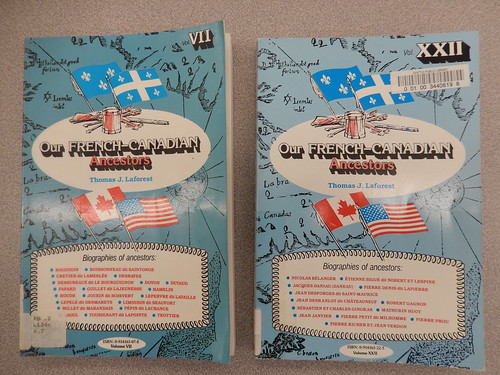 My father's father's father's father's father's father's father's father was a man named Hilaire Limousin. He received the nickname "Beaufort" while serving in the French military, though neither that name nor his original surname lasted longer than a few generations. Unfortunately it's uncertain whether Hilaire adopted the surname "Brunelle" during his lifetime, or whether his second son Joseph was the first to adopt it. We know Joseph used the surname "Brunelle" in official documents, and a source which I couldn't confirm claims Hilaire's first son François was identified as "Brunel" in a 1715 deed; if indeed both sons were using this new name, then according to an expert whom I spoke with about this it's virtually certain Hilaire himself adopted it. But either way, Hilaire and his wife Antoinette Lefebvre are still a satisfying couple to think of as this family's beginning, since Hilaire was the first in its paternal line to emigrate from the Old World to the New, and since details about Hilaire's ancestors beyond simply the names of his parents are unavailable.

The single best source of information about Hilaire and Antoinette is still their chapter in Our French-Canadian Ancestors, pictured above; they're covered over pages 157-166 of volume 7, and Pierre Richer, their neighbor in Champlain, is covered over pages 182-207 of volume 22. I'll start here by paraphrasing the most important information from Our French-Canadian Ancestors, since it's not available online and seems to be out of print, but will intersperse reliable information from other sources whenever those sources don't conflict.

Hilaire Limousin was born in 1633, a year often remembered by history students as the one in which Galileo was convicted of heresy, in the French city of Poitiers, a city which is noteworthy for containing France's oldest Christian church. His parents were Pierre Limousin and Isabelle Fradin, whose marriage was recorded at Église Sainte-Radegonde-de-Poitiers. Hilaire had a younger brother named Gabriel who was born on February 4, 1650, and may or may not have had other siblings. He was also capable of signing his name.

Hilaire joined France's Carignan-Salières Regiment as a soldier in that regiment's La Fredière company, and sailed with the rest of his company from La Rochelle on May 13, 1665 aboard a (by all accounts decrepit) royal ship named L'Aigle d'Or after his regiment was ordered to New France to fight in the Iroquois Wars. He finally set foot in Québec City on August 19, 1665, after what was apparently a difficult journey for his regiment as a whole; in her report the following month, Marie of the Incarnation (the head of the local Ursuline order) wrote that, "Approaching land, impatient from so long a passage, they opened their ships' portholes too early, which let the air enter too soon and illness began, which caused desolation; first, twenty died of it, then it was necessary to hospitalize one hundred thirty more." Hilaire, along with the rest of his company, was generally quartered in Montreal, though after leaving Québec City on September 2, 1665 his company apparently first assisted in the construction of the original Fort Sainte Thérèse.

Once its mission was complete, the members of the Carignan-Salières Regiment were each given the choice to either be honorably discharged and remain in the New World, or else return with their regiment to France. Hilaire elected to stay, and so in 1668 transitioned from soldier to settler, eventually working as a tailor in a suburb of Québec City called Beauport.

On August 15, 1671, Antoinette Lefebvre arrived in Québec City on a ship named Le Prince Maurice from La Rochelle, as one of what are now often called the filles du roi (a program authorized by King Louis XIV and designed by Jean Talon for the purpose of promoting marriage and population growth in New France). She had been born around 1653 in the French diocese of Évreux to Charles Lefebvre and Louise Prudhomme.

Within the next ten weeks, Hilaire and Antoinette met and agreed to marry. They signed their marriage contract on October 29, 1671 in Québec City at the home of the notary Romain Becquet, in the presence of a number of their friends, and went on to celebrate their wedding at Québec City's Notre-Dame parish church on November 9, 1671. This wedding was blessed by pastor Henri de Bernières, who had accompanied François de Laval to New France in 1659 and had gone on to become Quebec parish's first priest.

Hilaire and Antoinette's family moved to Champlain (a village located on the north shore of the Saint Lawrence River between Québec City and Montreal) at some point before early 1675, since their third daughter was born there on February 14, 1675, and on January 29, 1675 Hilaire had received two land concessions from Étienne (in English "Stephen") Pézard de la Touche, the first holder of the Lordship of Champlain.

The first of those two concessions was for 1/4 of an arpent (one arpent being about 17/20 of an acre) of land located near Champlain's parish church; this land, which had already been cleared, was presumably intended for Hilaire's tailoring business and family home. The second of those two concessions was for 40 arpents of uncleared land in the nearby village of Laborde; apparently the assumption was that Hilaire's family wouldn't be able to survive on his tailoring income alone, and that his clearing and subsequently cultivating the Laborde land would be necessary to make up the difference.

Hilaire and Antoinette's home in Champlain was located between land granted to a religious order called the Sisters of the Congregation of Notre Dame (convenient since these Sisters could have educated Hilaire and Antoinette's children), and land granted to another tailor named Pierre Richer who specialized in making women's clothing; Pierre Richer eventually became the godfather of Hilaire and Antoinette's third daughter, and engaged in three or four recorded business agreements with Hilaire between 1676 and 1684, including an agreement made on December 21, 1676, to hire a carpenter named Guillaume de la Rue to construct the frame for a house. Although Hilaire and Pierre were both tailors, there wouldn't necessarily have been that much competition, assuming Pierre continued to specialize in women's clothing and assuming a major part of Hilaire's business became tailoring and repairing the uniforms for the people manning Champlain's nearby fort (which just might have been what attracted him to Champlain in the first place).

As of the 1681 census Hilaire and Antoinette had five daughters, Hilaire still identified his profession as tailoring, and by that point the family had apparently managed to clear five arpents of land for cultivation. They also owned "a few horned animals."

Their first son, François, was born in 1684, after an unbroken line of eight daughters (including their first who unfortunately died within three months of her 1672 birth). Hilaire and Antoinette then went on to have two or three more daughters (Our French-Canadian Ancestors lists three but King's Daughters and Founding Mothers: the Filles du Roi, 1663-1673 claims Etiennette and Antoinette were really the same person), then in 1692 their second son Joseph, and finally in 1694 their third son and last child Pierre.

Hilaire died on May 15, 1708, and was buried the next day in the cemetery of Champlain's parish church. His death certificate states that he died "in communion with our holy mother church, after being fortified with all the sacraments with the exception of the Eucharist, which he was not in condition to receive." Unfortunately there is no record of Antoinette's death, but we do know she was still alive at the beginning of 1722, a year in which her daughter Charlotte (the first daughter born after François) became married and in which (on January 18) she formally ceded her rights to Hilaire's Laborde land to her children; we also have no reason to believe she was buried anywhere other than in the same graveyard has her husband.

There is a slight mystery surrounding Antoinette's will. Basically, she had her will drawn up on July 5, 1711 (with the help of Daniel Normandin) in favor of her firstborn son, and on that same day agreed to pay that son 300 livres "on condition that he work for her for three years." About ten months later, on April 25, 1712, Antoinette had that will nullified, which I can only assume means all of her unencumbered property was distributed according to her jurisdiction's default intestacy rules upon her death. However, Our French-Canadian Ancestors says that her firstborn son inherited all of the family's Champlain land anyway, and of course Antoinette had already ceded the Laborde land, so presumably this nullification only affected her firstborn son's receipt of the 300 livres and possibly some other miscellaneous personal property such as tailoring supplies, furniture, and livestock. But, what exactly went wrong with the work arrangement she originally desired with François?

In any case, although Antoinette's firstborn son François may have inherited all of his family's Champlain land, it is through her secondborn son Joseph whom all present-day Brunelles who are descended from Hilaire and Antoinette trace their ancestry back to Hilaire and Antoinette: in 1718 Joseph married a woman named Marie-Joseph Dubois, eventually moved with her to Gentilly (a city now famous for hosting Quebec's only nuclear reactors), became captain of Gentilly's militia, and had a number of sons from whom Antoine, François, Alexis, and Pierre each became the principal branch of a Brunelle or "Brunel" family tree (it was Pierre in my case). One gets the impression Joseph led a well-balanced life; he apparently indulged in the coureur des bois lifestyle but not to excess, cultivated land effectively (though he never did get around to working some land he was granted near Lake Saint-Pierre in 1730), and in general sense seems to have become something of a pillar of the Gentilly community. Apparently records still exist from Joseph's time as captain of the militia, and he is recorded as appearing before the Sovereign Council of New France concerning several matters which Our French-Canadian Ancestors didn't go into detail on.

In fact, my personal opinion is that any Brunelles descended from Hilaire and Antoinette who are both fluent in French (as unfortunately I am not) and who are willing to travel to Quebec City to research their family history would be well-advised to focus on Joseph rather than Hilaire; between his duties as captain of the militia and whatever he was representing to the Sovereign Council of New France, not to mention any land-related documents he may have signed after Hilaire's death concerning the distribution of land between his siblings, there will presumably be far more official records from Joseph's life than Hilaire's, and once you've tracked them all down you could have the pleasure of revealing to the entire family a high-resolution copy of the first signature using our family name.

In the posts following this one I'll comment on some of the photographs I took of places relevant to Hilaire and Antoinette's lives when I visited Quebec City, Champlain, and Montreal for this purpose over August 6-12, 2013.
Subscribe
Comments for this post were disabled by the author