A reenactment of the arrival of the first filles du roi 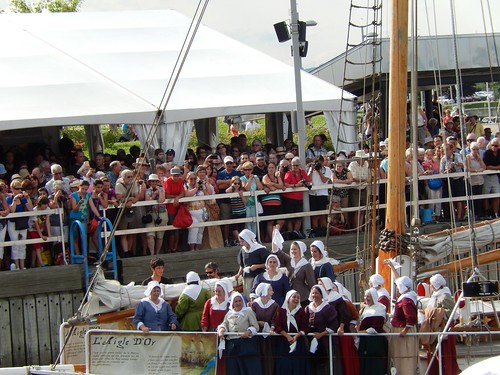 Although my round-trip flight was to and from Montreal's airport, I made sure I was in Quebec City in time to see the beginning of its annual Festival of New France. This year its festival began with a reenactment of the arrival of the first filles du roi, to commemorate that event's 350th anniversary.

Although Antoinette arrived on August 15, 1671, the first filles du roi arrived on September 22, 1663, in the same ship which also carried Augustin de Saffray de Mésy (Quebec's first governor) and François de Laval (Quebec's first bishop). Amusingly enough, this ship (the l'Aigle d'Or) was the same one which just two years later would carry Hilaire to Quebec; to judge by contemporary accounts this ship was in very poor condition, apparently with a "worm-eaten hull" which only held water thanks to endless patches, and was likely scrapped not long after its 1665 voyage (and in any case since it was a cargo ship rather than a military vessel no physical mementos from it seem to remain).