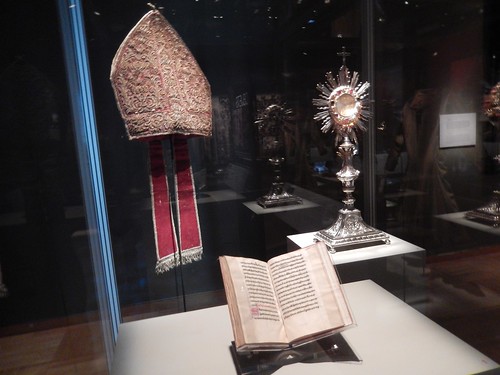 He's also someone Hilaire would doubtless have met or at least seen, as he apparently personally led the celebration following the successful rehabilitation of lapsed Catholics among Hilaire's regiment which took place just five days after it landed (see pages 24-25 of The Good Regiment).

To judge by the card accompanying this display at Quebec City's Musée de la Civilisation, this miter was made around 1674, which if true means Hilaire may have seen Laval himself upon his regiment's arrival but not this actual miter.

It should probably be acknowledged that Hilaire's company within the Carignan-Salières regiment may have needed good moral guidance more than most of his regiment's companies; The Good Regiment goes into this in more detail over pages 98-102, but Hilaire's company commander, a certain Balthazard de La Flotte de La Fredière, was apparently so deeply depraved that the colony's top civilian leadership had him involuntarily sent back to France a full year before the rest of his regiment.
Subscribe
Comments for this post were disabled by the author