Inside the sacristy at the Notre-Dame Basilica 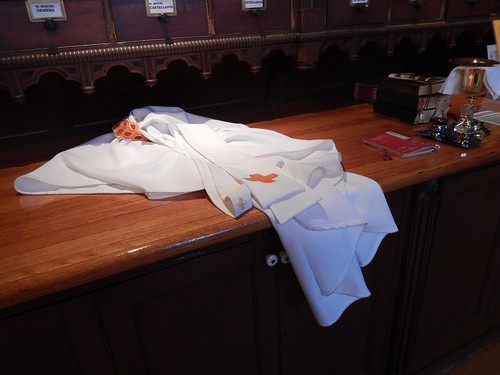 Surprisingly, the grand tour of this basilica included even normally private areas such as the sacristy, and when taking this photograph I found myself thinking about Hilaire's tailoring profession.

One of my takeaways from Jack Verney's book The Good Regiment: The Carignan-Salières Regiment in Canada, 1663-1668 was that not as many former Carignan-Salières soldiers became model citizens in Quebec as French policymakers presumably would have hoped; after discharge at least some seem to have been lured away from traditional family life by the adventure of life as a fur trader, aka a "runner of the woods" or coureur des bois. So, it just might have been Hilaire's professional skills as a tailor which immunized him to the temptation of that lifestyle, hence leading to the marriage which eventually resulted in me.

So, I guess what I'm saying is this: always tip your tailor.
Subscribe
Comments for this post were disabled by the author