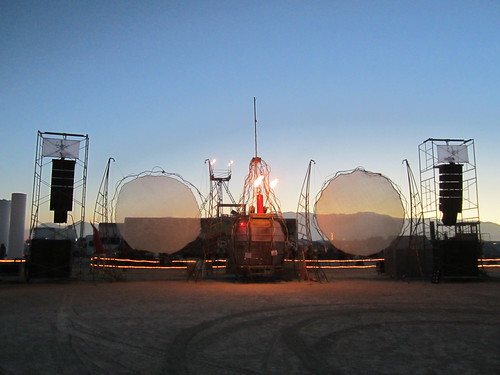 Each of the three times I've attended Burning Man, this has been my favorite music camp. Like all the other music camps (and as far as I know all the camps just in general) they receive no grants or other assistance from the Burning Man organization, and everything you see here was created or purchased, and then moved here and assembled, by Opulent Temple's volunteer crew.

I'm not really the dancing type, but I have to say Burning Man in general, and this outdoor music camp especially, has been the one place I've actually felt comfortable dancing. Age and body type genuinely do not matter, and moving your feet simply feels like the most natural way to enhance your experience of the music, which itself seems to complement the surrounding desert environment.

This picture was taken just before Opulent Temple's opening ceremony, and for the record (no pun intended) the first song played this year was Jane's Addiction's "Up the Beach."

In the hope of avoiding confusion, I should clarify that "Opulent Temple" (i.e. this dance camp) is unrelated to "The Temple" or "The Temple of Juno" (i.e. the enormous temple-like wooden structure that you'll see pictures of a bit later).
Subscribe
Comments for this post were disabled by the author