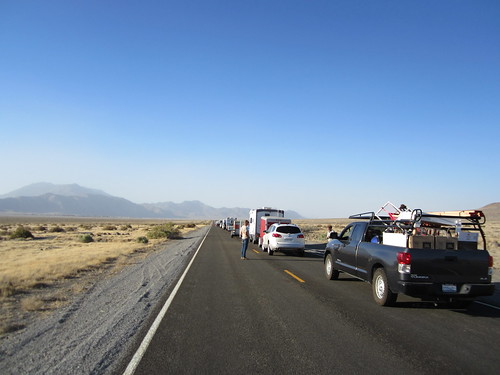 The best way I've found to explain Burning Man is to say that when purchasing a ticket to this event you aren't purchasing the right to experience any particular scheduled entertainment, rather that you're purchasing a conditional right to be a citizen of something called Black Rock City. Although this "Black Rock City" shares many of the same characteristics of an ordinary city, such as orderly street signs, maps, an airport, radio stations, newspapers, emergency services, ingress and egress traffic control, street lights, sanitation (in the form of porta-potties), and public art, it differs from any other city in the following significant ways:

Obviously each year Black Rock City hosts some absolutely jaw-dropping large-scale public art, and obviously the sight of this city at night, as illuminated by all of its unique artworks and vehicles, is legendary. But in trying to explain Burning Man that's not what I usually choose to emphasize, since I believe more significant than what is there is why it's there: everything you see, no matter how huge or amazing it may be, was created not for personal profit but rather simply for the joy of creating it and sharing it with others.
Subscribe
Comments for this post were disabled by the author