Something that impressed me at University of Puget Sound 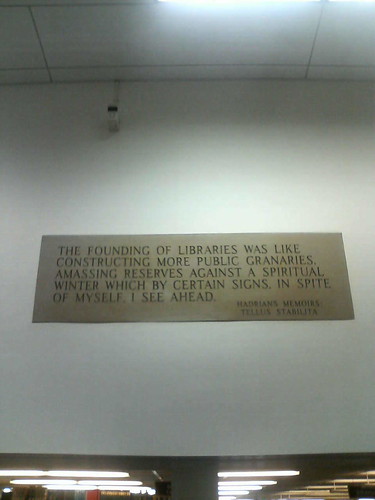 I've already posted in this journal pictures of the University of Puget Sound campus (the school at which I obtained my Bachelor's degrees), but I'm pretty sure I didn't post a photograph of this plaque from that school's library.

This quote from Emperor Hadrian haunted me at the time, and haunts me still, given how quickly hard-gained engineering knowledge was lost as the Roman empire subsequently deteriorated.

In this regard I feel compelled to add that in the eighth century, while most of Europe was still mired in willful ignorance, it was largely Islamic scholars who worked to preserve what remained of this kind of ancient knowledge. Contemporary conflicts over power and religion aside, I believe that modern scholars of any sort, anywhere, owe those pre-Renaissance Islamic scholars a debt of gratitude for preventing the loss of any more than had already been lost.