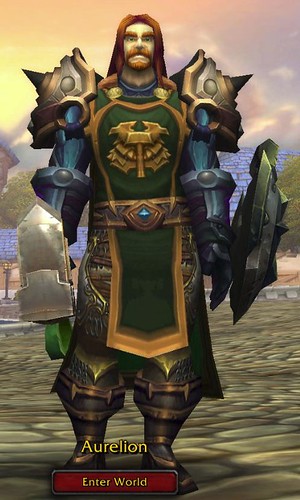 I played the online game World of Warcraft from late 2006 to early 2007, quitting just after this game's first expansion pack was released, and just before I started seriously preparing for the law school admission test.

One way I made it through law school was by promising myself that once all this was over I'd spend at least a few days completely WASTING time. And, since I don't like doing anything halfway, about ten days ago I reached a second time for World of Warcraft: the brass ring of time wasting.

By the time I quit earlier today, I'd finally learned to play my paladin class competently enough to where I was genuinely useful as a healer in most 5-man groups.

So, what are my take-aways from this experience, both positive and negative?

Here are three good things about World of Warcraft:

By contrast, here are three negative things about Word of Warcraft:

Personally, what I'd like to see is a virtual environment as high-quality as World of Warcraft which attempts to duplicate the REAL WORLD. In other words, which would let me visit any place on the planet, and converse with people (specially flagged) who verified themselves as being residents of that place. I'd be happy to enter a virtual world and spend some time sharing what I love about Seattle, if I could virtually visit McMurdo Station, or Mecca, or Moscow, and chat with people whose lives are rooted there.

But whether or not that happens, I will probably always keep an eye out for any announcements to the effect that World of Warcraft is being canceled. Eventually, the company that makes it will either fold, or want to move on to more profitable things. And should such an announcement be made, I think I'd like to pick up World of Warcraft again one last time, just before the servers are finally powered down, and have one last dance at the end of the world :)