Pausing at the HI New York hostel to check in and drop off my bike and bags... 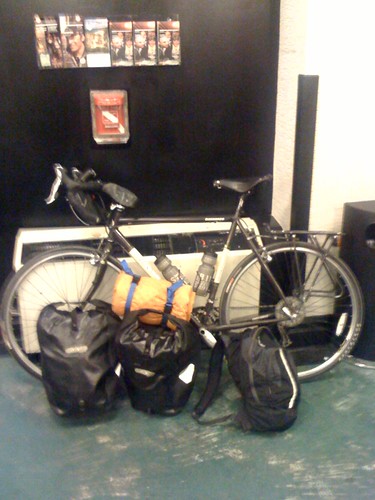 The HI New York hostel is located within Manhattan (891 Amsterdam Ave) in a good neighborhood with a subway terminal adjacent to it. It has all the normal amenities of a good hotel, the only catch being that you sleep in rooms which house up to five other fellow travelers (mostly college students on break) in bunk beds, but the shared bathrooms and showers are kept reasonably clean, you have lockers for your valuables, and something too big for the lockers (like my bike) can be stored indoors in a locked room for a mere $5 extra a night.

The cost is only $29/night (i.e. less than any other motel I stayed in this entire trip), and I was able to secure three consecutive nights at the height of the tourist season by calling them only two days ago.

There is no maximum age, or indeed any catch other than the fact that the rooms are shared.

I've stayed here twice before, and as far as I'm concerned this facility is literally a national treasure for its ability to give people of ordinary means a chance to see what would otherwise be the most expensive city in the United States.