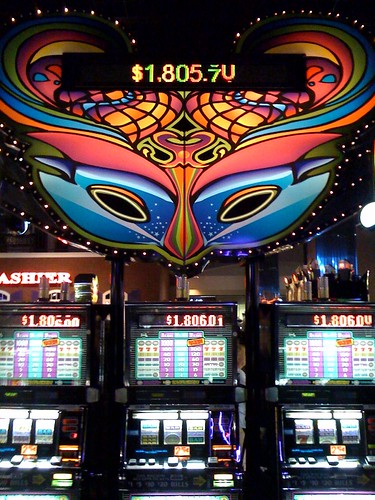 I thought I'd have dinner tonight in a casino: after all, even though gambling doesn't appeal to me in the slightest, it must be admitted there is a certain resonance between the alcohol industry (the study of which obviously occupied my morning) and the gambling industry.

Physicists and engineers have (for good reasons) failed to create a perpetual motion machine, there are sound reasons to believe any such effort will fail, and patent applications for any device claiming such a basis are quickly rejected.

Having said that, there ARE at least three things which could fairly be called perpetual money-making machines, since they're based on human drives SO easily monetized: pornography/prostitution, gambling, and mind-altering substances.

At this casino, in addition to the usual gambits of cheap alcohol and waitresses in short dresses, the innovation has apparently been added of female massage therapists wandering the gambling floor and offering backrubs to the high-rollers as they play.

In other words, this casino has found a (admittedly brilliant) way, based on what are probably sound psychological principles, to promote the myth to heterosexual men that doing the equivalent of setting a pile of money on fire due to an addiction will make young women want to touch you, all without even REMOTELY flirting with actual prostitution.