Officer! My apparently merely bruised finger CRIES OUT FOR JUSTICE!!! 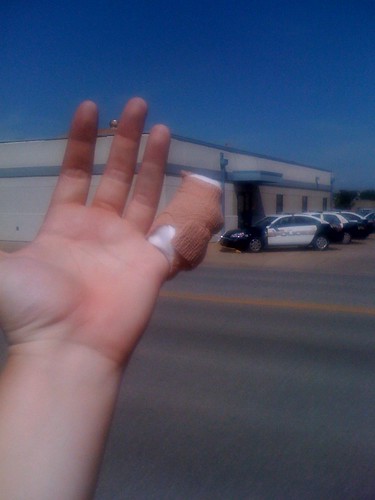 The X-Ray suggested this was at most a hairline fracture, and probably not even that: just one of the more painful impact bruises I've ever had.

I didn't think there was any point in filing a police report, since I couldn't even describe the vehicle (i.e beyond its being a car rather than a truck) much less provide any characters from the license plate, but the nurse seemed to think I should at least ask the police if they wanted one under the circumstances.

Although sympathetic, the municipal police didn't seem to think there was realistically much point in filing the report without any description of the vehicle or license numbers.

And thus ends the saga of my one-and-only hit-and-run :)

Even if it weren't for this splint, poor mobility and pain in this finger would make dealing with a flat tire (i.e. getting the tire on and off the rim) a real problem, among other things, for at least a few days. So, I shouldn't be continuing this ride by bicycle while that's the case.

So in the interest of using those days well, I'm currently looking into whether Enterprise Rent-a-Car has any locations in El Dorado KS, or at least Witchita KS (if I remove the bags and front tire I find I can slide the bike into most vehicles), and allow me to return the vehicle in a city further along the route.

This could be a blessing in disguise: the heat and humidity are getting hard to deal with, and there's no longer that much for me to photograph along the way. With a car I could stop at more historic sites and museums which might be near to, but not exactly on, the TransAmerica route, and hence get more use out of the time I have.