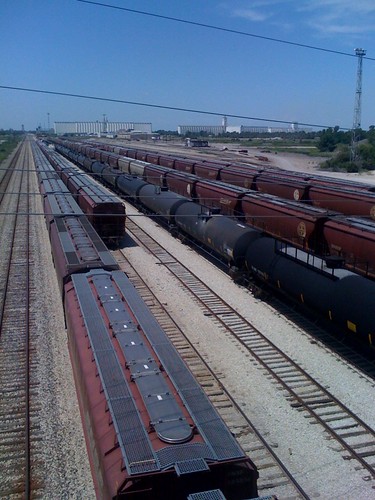 I stood on this bridge (just north of E Ave G on S Airport Rd in Hutchinson KS), looking west, for a good long time.

To my immediate left was a salt mine producing 500,000 tons of salt per year, and capable of continuing to produce at that rate for at least the next 2,000 years.

In front of me was a BNSF Railway rail yard, representing the most efficient means ever discovered for transporting heavy loads (including grain) over land, and which reaches all the way across the continent.

To my immediate right was not only the longest grain elevator under a single head house in the world (alone capable of holding enough grain to give every one of this planet's 6.8 billion people a fifth of a loaf of bread), but at least seven other huge grain elevators within a mere blocks of each other.

Salt, roads, and grain: these were each things the ancient Romans needed and valued, and on this bridge in one turn of your head from left to right you can see technology for each of those three things that they would have understood, but on a scale they could never have imagined.

You can try to explain the Internet, postmodernism, quantum mechanics, the hydrogen bomb, and the heat death of the universe later: if you somehow succeed in building a time machine and manage to bring a Roman centurion forward in time, start him out here.