The rest of the story... 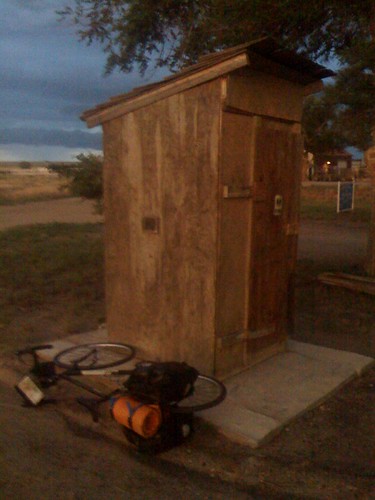 The wind was too bad even at the time I arrived in Arlington CO to think of trying to set up my tent, but the tiny rest area where I stopped DID have this solidly-built outhouse. So, I figured I'd just wait out the storm in this outhouse: I found some strong cable which I was able to loop through the door's latch to hold it shut from the inside against the wind, though the light from the by then almost-constant lightning certainly presented quite a show through the door's cracks, and the accompanying thunder was obviously fierce.

Obviously I wanted to save my phone battery for potentially more important things, and it was running low anyway; hence, reading books on my Kindle iPhone app wasn't really an option while stuck in this outhouse.

So, what would YOU do if you were confronted with the possibility of spending an ENTIRE NIGHT sitting in an outhouse, awake, with no light, no music, nobody to talk to, and nothing to read?

Me, I tried to reach Zen enlightenment.

As you can probably safely conclude from my seemingly unending off-color jokes in this blog about bull testicles, reaching Zen enlightenment is something I've probably never actually done.

But in any case, supposedly the Buddha accomplished this feat by simply sitting quietly and focusing his entire attention, to the exclusion of all other thoughts, on each of his slow, and rhythmic, inhalations and exhalations. So I figured I'd just sit in this outhouse all night and do the same thing.

But a few minutes into this (genuinely sincere) effort the wind died down enough for me to set up my tent, and of course my mind then jumped up and down urging me to take advantage of this opportunity.

And that, ladies and gentlemen, is the sad story of how I ultimately failed to reach enlightenment.

If we as humans actually DO have souls, and furthermore face a critique of the lives we led immediately after our respective deaths, then I wonder if the first thing I'll hear after my own death is: "Russell, you should have stayed in the outhouse."

That's a thought which is genuinely going to haunt me.