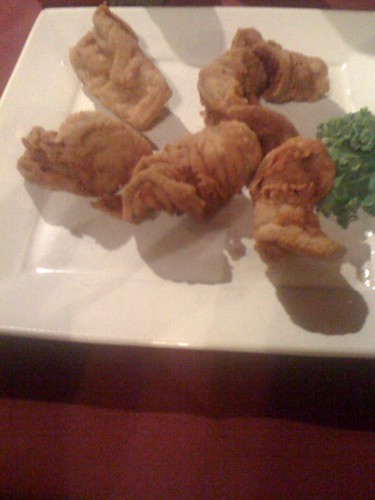 Straight men from blue/urban America, and straight men from red/rural America, share the same overriding goal: expressing security and confidence in their sexual orientation without coming across as homophobic.

In blue/urban America, proving one is not homophobic is easy: you can keep the remote control near you but choose NOT to change the channel when reruns of Queer Eye for the Straight Guy come on (despite an understandable skepticism that the bewildering array of different skin care products recommended on that show actually yield visible differences), you can casually mention your gay friend (even if that particular friend isn't actually gay...), etc.

But in red/rural America, what options do you truly have, IF you want to prove you're NOT homophobic, OTHER than to eat fried bull testicles?

So, here I am, with an order of "Rocky Mountain Oysters" in front of me.

I'd been imagining this moment ever since I planned it, but I never imagined its consummation would end up being so casual: I started catching up on Facebook, then email, and after this plate was delivered ultimately found myself munching on testicles, almost thoughtlessly, out of pure hunger.

I suppose there's a lesson in there.