The abandoned camper I stayed in while in Jeffrey City WY 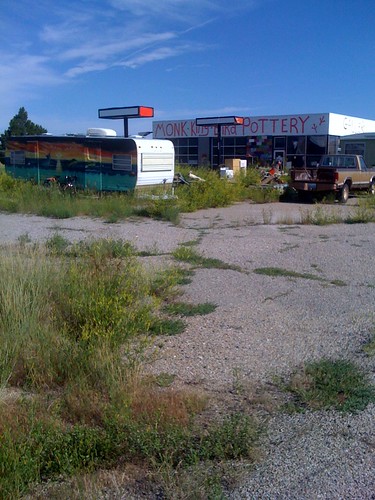 You can see my bicycle leaning against the camper door to the left.

I have to say that staying the night in this city was one of the most haunting experiences of my life.

This city's entire purpose for existing was lost when the Cold War was abandoned. The city itself had long ago been essentially abandoned, with all but 100 of its 5000 residents leaving, and every business and municipal building other than the bar abandoned and boarded up. The only customers at the bar were people who were just passing through, and a few presumably retired locals. There were relatively few signs of human activity for quite a few miles in either direction of the city, and I was staying the night in an abandoned vehicle parked in front of an abandoned business.

While looking up at the camper ceiling, in my sleeping bag on the camper bed (upon which oddly enough someone had previously placed one animal antler and one old automobile tire), all I could think of was that this whole situation might be how a modern-day religious writer might try to represent purgatory.

Put in another, more secular way, this experience was like being dropped into an episode of the old TV show "The Twilight Zone," and specifically an episode where you're the last person on Earth and that fact is somehow your fault.

My nightmare in this camper that night was that the next morning the rear tire on my bicycle failed again and that I was trapped in that city forever.

But I rode out the next morning, nothing failed, and after a difficult and desolate ride finally made it to Rawlins WY that evening.