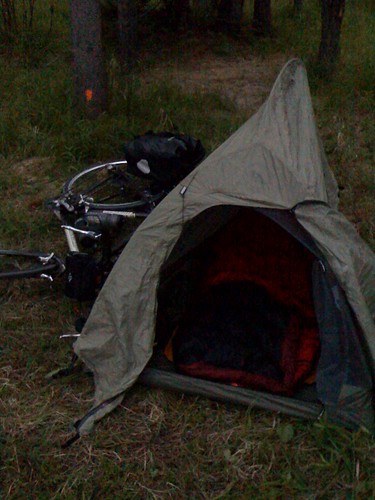 This was where I set up camp in the campground whose road was shown in my previous post. I was not able to find reliable cellular or WiFi access between posting that photo and now, but as always you can click on any photograph to get to its flickr page, and by viewing that photograph's "properties" see the date/time embedded in it at the time it was taken.

I'm pretty sure flickr also provides a feature whereby you can look at photographs OTHER people took at the same location as my photographs, which it does by comparing the GPS coordinates embedded in the photographs everyone else has uploaded against those embedded in mine.

One I get home, I look forward to using this feature to browse (probably much better) photographs taken by others at each of the places I have been :)

I should note that this photograph was taken before my tent was fully staked, which is why the tent doesn't look like it's supposed to, but obviously daylight was running out, and the phone I'm using as a camera doesn't have a flash :)