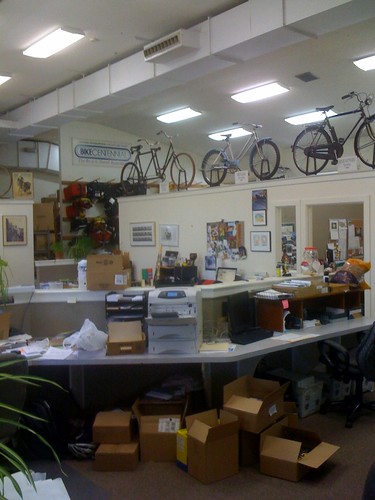 I chatted with a few members of their staff while I was there, and learned the following:

About 2000 people complete the TransAmerica Trail each year.

There has not been a single fatality so far this year (which I should add probably puts my aforementioned concerns about US12 in perspective), and apparently in most years there aren't fatalities.

The oldest person, to their knowledge, to have ridden the entire TransAmerica Trail was a gentleman who completed it at age 79. Furthermore this individual was camping rather than using motels, so he would have been carrying a full load on his bicycle. This underscores what I've said before about this sport being an almost perfect lifelong activity.

Aggressive dogs, particularly in Kentucky, are indeed a real issue. Cycling shoes are rigid, so one strategy apparently is (if you feel coordinated enough to do this while still moving) to unclip and give the animal a hard kick to the head. Pepper spray is another, but I'm pretty uncomfortable with that: obviously whoever owns the dog in question loves it, and doesn't particularly care one way or the other about cyclists since he or she is allowing his or her dog to chase about twenty of them a day, so I'd be (reasonably I think) worried about the owner coming out of his shack with a shotgun if I left his beloved pet temporarily blinded and in excruciating pain. I also can't reliably outpedal dogs, and apparently ignoring them doesn't always work. So, apparently the strategy I'm left with is dismounting and keeping the bike between me and the dog as I back away.

I asked about US12 into Missoula: apparently there aren't any better road options unless you want to ride on I-90 itself, which isn't necessarily better.

It sounds like their pattern is to alternate between creating new routes and revising the old routes: they just came out with the new Sierra Cascades route, so for now they're not blazing any new trails.

So far about eleven states have gotten on board with their U.S. Bicycle Route System plan. However, the more I hear about this project, the more I like it.