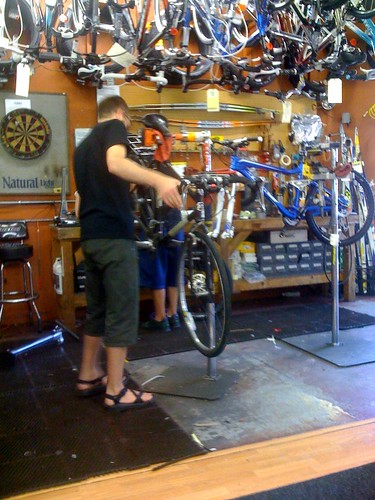 I know how to do basic bicycle maintenance and repair, but I don't know how to true wheels: since at a minimum my bicycle could benefit from that, I decided to bring it to a well-regarded Missoula repair shop today for some professional attention, something it has never had in all its 6300 miles.

When this guy is done it will have: new tires (both front and rear) even tougher than what I was using before, tire liners inside each tire to stop goathead thorns (i.e. from the tribulus terrestris plant later on in my route), new tubes (my guess is that the rear was weakened during the blowout and the front by an imperfect patch I made just after crossing into Idaho), trued wheels, and new brake pads (which other than the hopelessly compromised rear tire was probably its most critical problem).

I'll replace the chain myself Tuesday morning, at which point it should be just like new.