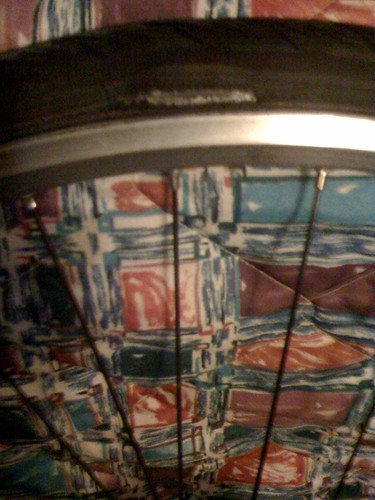 In all my time long-distance cycling I've never encountered a critical mechanical problem I've been unable to resolve on my own, until this morning.

The indirect cause of the catastrophic rear tire failure I experienced riding out of Lowell ID toward Missoula MT this morning was my bicycle pump: it has an integral pressure gauge which I've relied on (e.g. during the entire course of my first cross-country ride in 2008) to let me know when a tire is approaching its maximum rated pressure.

As far as I can tell this gauge had become unreliable, and as a result I inflated my rear tire beyond its rated capacity this morning.

Aggravating factors may have been that both tires were already fairly worn from my ride from Florida to Washington DC, and that I'd let my bicycle sit upright (with both tubes slowly deflating) after arriving home from my first cross-country ride for several months, which could have weakened each tire's sidewall at the point nearest the floor.

Regardless, the result today was a blowout which ruined my rear tire. I had spare inner tubes as well as inner tube patches, and even had materials to "boot" on an emergency basis the surrounding tire, but the amount of tire weakened by this blowout (not entirely captured by the accompanying picture taken with the rear tube only partially inflated) exceeded the combined length of all the tire boot material I had with me, not to mention the fact that not only was there no source of bicycle supplies between Lowell and Missoula should this emergency repair measure not prove lasting, but for the next 66 miles there was not even a source of either food or water.

So, when a nice family pulled up by the Lowell diner from my last post and offered me a ride into Missoula, I accepted.

And, frankly, this was probably for the best: US12 from Lowell to Missoula is widely regarded as the worst part of the entire TransAmerica Trail, with many sharp turns making it difficult for motorists to see you, no shoulders, heavy traffic, sharp drop-offs into rock if you DO get driven off the road, and no places to resupply anything. Plus it's mostly uphill, so naturally you're riding less steadily and not even remotely keeping up with prevailing vehicular speeds.

Frankly, watching all this go by through a pickup truck window this morning after I'd accepted the aforementioned family's offer of a ride, I thought what I was seeing was far worse than anything I dealt with in 2008 on the Southern Tier route, and that the part of the TransAmerica Trail I'd just skipped was grossly unsafe.

I offered the family which gave me this ride compensation for gas and their time, which they naturally (and graciously) refused, given that they were headed into Missoula anyway.

But as it turns out this family's father (i.e. the one driving their truck) used to work in the computer industry, as I did for eight years, and had recently obtained a patent for a kind of technology I was familiar with, even beyond the fact that I'd just spent the last year studying patent law.

I'm proud to say that I was able to see a new field of use for the material claimed under his patent, one which would be much more lucrative (and also much more easily easily licensed) than the field of use in which his innovation has previously been used, despite the fact that the scope of his patent claims would appear to cover both fields of use.

He was tired, so I explained all this twice, but if he remembers tomorrow what I told him as we drove into Missoula tonight, I strongly suspect no member of his family will ever have to work again.

It's funny how life works out sometimes.