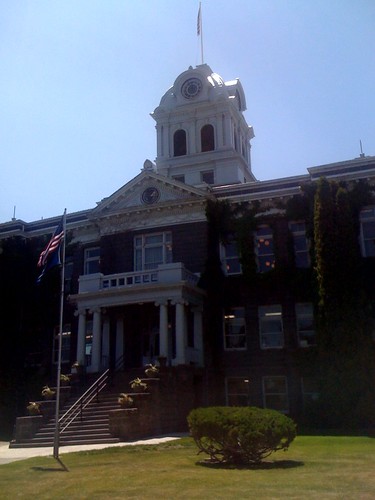 No trials today, but they have some arraignments starting at 1pm today that I can observe. I'll hang out inside until then.

A few fun facts about Prineville: it's the only incorporated community in the entire county, it's where Les Schwab Tires got started (and currently maintains a factory as well as headquarters), and it's apparently the only city in the United States to have ever created and operated its own railroad (which apparently connected the city to a nearby Burlington Northern line).

Originally the railroad carried a lot of lumber, and was so profitable that (uniquely) Prineville had no city taxes, but according to the lady I talked to at the museum about this the Les Schwab factory isn't adjacent to the municipal railroad and hence can't use it, so today the railroad is mostly unused.

There have been talks about extending railroad tracks to the factory, but no agreement has yet been reached.