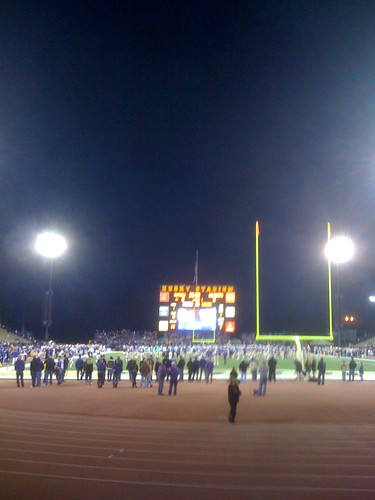 This is the first time I've attended a football game. Although my knowledge of football tactics is admittedly weak, I understand this to be the general strategy: our team shall strive to "win," by accumulating "points," while the opposing team shall strive to frustrate that very goal. At the end of the game the team with the most of these "points" is likely to win.

Where this gets confusing is that the game apparently isn't ONLY about points: right now the game hasn't even started, so technically the score is zero to zero, but the crowd has already judged one team to be morally superior to the other.

Where this also gets confusing is that even if the opposing team, as morally degenerate as they seemingly are, should indeed be defeated by our far more morally upright team, then we will just have to fight them again in a later year.

I am reminded of the Greek myth of Sisyphus, doomed to repeatedly push the same boulder up the same hill for all eternity.